41 per cent of UK towns are clone towns and a further 23 per cent are on the verge of becoming clone towns, according to the widest ever Clone Town survey results released today by leading independent think-tank nef (the new economics foundation).

In general, urban planning is a very interesting process of development of cities, which preserves the "personality". Thus, the city is like a living organism, consisting not only of architecture, people, animals, plants, but also of a certain spirit, which impregnates all of the above; You can read more about this at SpecialEssays.com, giving them the features and boundaries they need.

Only 36 per cent of the high streets surveyed retain their distinctive character with more than two thirds of their shops being independents.

The nef report, Re-imagining the High Street: Escape from Clone Town Britain, also brands the multiple chain outlets as “fair weather friends” who have either abandoned the high streets entirely or given up so-called secondary locations.

The report says that overall trend towards “Clone Town Britain”, continues, despite widespread publicity about the loss of local identity following the 2005 Clone Town report.

Paul Squires, the co-author of the report said: “The towns most dependent on the big chains and out of town stores have proven to be most vulnerable to the economic crisis. The government’s “Big Society” idea cannot be built on these fractured local economies, represented so clearly by the empty shop fronts along our high streets.”

“It’s not all doom and gloom,” Paul continued; “we found many towns that are thriving with initiatives to retain local diversity. The local currency schemes in Lewes and Brixton, for example; community buy-outs of post offices and pubs from Yorkshire to Cornwall; and loyalty cards for shopping at independent retailers from London to Penzance.”

Elizabeth Cox, co-author of the report added: “We need to completely re-evaluate what we use our high streets for now that the age of mass retail is juddering to a halt. Our high streets could become places where shopping is just one small part of a rich mix of activities including working, sharing, exchanging, playing and learning new skills. As the hub of our communities, the high street could become the place where we begin to build a more sustainable world.”

nef is calling for action from:

Reimagine your High Street is the antidote to Clone Town Britain. Through short workshops or our long-term programme we work with residents, businesses and local government to create town centres that are sustainable community hubs, where people go to meet each other, not just to shop. 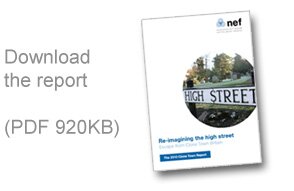 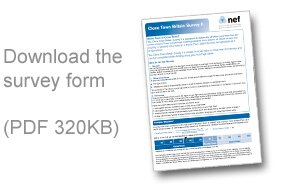